A guide to Deer Breeds in Australia

Consider this your essential deer hunting guide to Australia.

There were many different species of animals released in Australia between 1800 and 1900, however not all species survived in the harsh Australian environment.

Six species of deer however acclimatised easily to life in the Aussie bush and now have flourishing wild populations. There may be more species that have gone unnoticed due to the large expanses of space in the Australian bush.

Of the six species, some are descendants of the original species released during the acclimatisation era, while others have escaped from modern deer farms. With these deer living and breeding freely in Australia, there are more wild deer in Australia right now than there has ever been in any time in history.

From a hunter’s perspective, deer are an excellent animal to hunt, they are widely available with excessive numbers and the added bonus of being rather tasty if prepared right. See our guide to skinning a deer for information on preparing the deer meat for eating.

The guide below outlines the general appearance and demeanor of each of the species currently living wild in Australia.

The sambar deer are Australia’s most popular game animal. The sambar is well known for being a formidable and clever game deer, and they prove to be quite the challenge for deer hunters.

The sambar was introduced around 1850 and were released at various checkpoints around Victoria and the northern territory. Hunted extensively in Victoria, the sambar has thick populations along the Great Dividing Range and well into other parts of NSW. Appearance of the Sambar Deer

Large in stature, the sambar stag has been known to weigh up to 220 kg and stand up to 125cm high (to the shoulder). Their coats can range from a dull brown to a light grey, with some animals being spotted with much darker coats. Their bellies resemble the colour of old straw and a tail which incorporates long orange hairs. This colour scheme gives them an edge when evading hunters as they blend in well with the colours of the Australian forests and mountains.

The sambars antlers are six pointed and feature a V themed formation, which can be narrow with short antlers and as they mature the antlers can spread out. Mature stags are the most difficult to hunt with antlers over 76cm considered to be a great prize.

Sambar deer don’t usually congregate in herds, however sometimes small groups coexist during the antler growing period. Stags are primarily solitary animals. The best way to hunt the Sambar is to become familiar with their feeding habits and researching optimum hunting times.

For example, the sambar feed on both native and introduced plants and prefer to feed in the last hour before sundown.. Knowing the locations of the plants they prefer to feed on can give you the edge when tracking these wary deer to hunt. Hunting Sambar requires great perseverance and stalking being the most effective method for the active hunter, followed closely by stand hunting. Stand hunting requires a much more intimate knowledge of the animal and the hunter must be committed to waiting.

As far as legal calibres are concerned, the Sambar’s minimum is .270 with the more experienced hunter opting for much larger calibre such as .375 or .457 Winchesters.

Fallows are spread throughout the world and were introduced into Australia in the 1830’s and how have well established herds in 5 states. Appearance of the Fallow Deer

With a varied coat colour, the Fallow have been noted with coats ranging from black, white, grey/brown and light brown. During winter the fallow have spots on their coat, and those with a light brown coat have been known to have spots all year around.

Grazing mostly in wooded areas, the Fallow also graze the open country with the most successful herds choosing forested areas. Preferring areas where bracken fern and wattle are most prominent, the Fallow have become quite comfortable in Australia.

Hunting the Fallow Deer in Australia

The Fallow buck have impressive antlers which have been noted to appear flat above the second tine with a palm like appearance. A buck with a 60cm antler length is considered to be a prize kill. April is the optimum time to hunt Fallow, as the bucks are easier to find due to their mating call. Conversely, during this time bucks fight over mates and territory more often and their antlers are prone to breaking during the fight.

Does tend to stay close to their buck and can possibly warn him of approaching hunters, so stealth must be a priority. For the patient hunter, stand hunting is a good way to catch Fallows as bucks often develop regular patterns of behavior and movement. These animals are not overly large and usually a small calibre such as a .243 can be used to take one down.

Red deer was introduced to Australia during the mid-19th century and had its origins in English game parks. Herds are largest and strongest in QLD and the red deer has been trapped for farming in the past resulting in many reds existing in places they were never intended to be living. The red deer is a hardy animal whose ability to survive in many environments ranging from thick jungle, to grasslands to open scrub. Although they prefer a space which is only partly wooded with both scr4ub and grassland, they are able to survive even the harshest environments.

Reds are large and the stags can weigh up to 160kg with colour ranging from light red through to black. They are easily identified by buff coloured patches to the face, rump and along the neck. They are characterised by 12 pointed antlers which can grow up to 75cm.

Reds prefer to congregate in herds of up to a dozen animals, usually led by a dominant hind. Bachelor herds are not uncommon, but these usually dissipate once the males grow old enough to desire their own territory. Stags are usually easy to locate due to their loud mating calls. It is thought the red deer originated from the highlands of Scotland and they are well known for having a well-developed sense of smell and auditory sense. This is negated by poor eyesight so hunters can usually adopt a quiet and steady approach from downwind.

Reds are usually taken down with a .270 Winchester with a telescopic sight.

As far as introduced species goes, the Rusa was late to the party. Arriving in Australia around 1860, they were introduced to VIC and WA during that year, then again in NSW during 1885.

The NSW introduction was a roaring success compared to the other states and trapping, bushfires and poaching has failed to reduce their numbers.

These popular deer have increased their range by moving closer and closer to humans by breeding on the outskirts of Sydney and Wollongong, as well as working their way south along the coastal ranges towards the Victorian border. Appearance of the Rusa Deer

Rusa are also hunted on private property on the north coast of NSW as well as a few select locations in QLD. The Rusa is a relative of the Sambar, however they do not grow quite as large as the latter. Sporting a sparse, coarse coat which is brownish grey in colour with a buff colour underneath a large stag will only reach 140kg.

The Rusa deer excel in many different habitats although they prefer an area which has both grass and bush. Their antlers grow up to 70cm and this would be considered a prize kill. A herd animal by nature, the rusa’s tend to congregrate in larger herds. They communicate with each other quite loudly, specifically during July/August period when they declare their terrotories.

The Rusa breed of deer are best hunted into the wind using as much cover as possible using the Rusa’s predictable movements as a guide. The minimum calibure recommended is .270 Winchester, although many have been taken with a lesser calibre.

Chital deer were amongst the first species brought to Australia, with records dating as far back as 1803. Released into NSW firstly, they were later introduced in to both QLD and Victoria, with the QLD release being the most successful. Beginning with a release of 2 pairs of Chital, the herds are now strong and live mostly on private property. Hunting the Chital means a trophy fee is paid to the landowner. 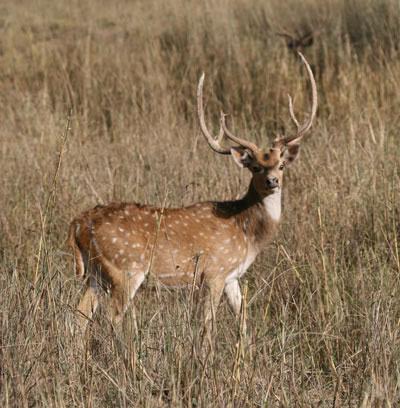 Appearance of the Chital Deer

The Chital antler is six pointed, with shape varying from wide to narrow and growing up to 72cm high.

Chital deer are usually found in large herds of up to 30 animals making hunting a trophy head difficult. Best hunted into the wind, a hunter must hunt during the early morning and avoid spooking the herd. Since they sleep during the hottest part of the day, morning is best to hunt. The ideal calibre for a Chital is .270 Winchester with telescopic sight.

Hog deer have specific needs for a habitat and as a result have stayed close to the areas they were released into in 1865. Hog deer require thick cover which is close to wetlands and marshes. Hunting is limited for hog deer, which are the smallest deer in Australia.

A mature stag will only weigh in at 45kg and as a result, antlers only grow to just over 35cm. Hog deer are usually brown all over, however in summer the coat can adopt a red tinge. As they age, the hog deer usually get grey hair on their face. Appearance of the Hog Deer

The smallest of our deer, a mature hog deer stag in prime condition will weigh about 45kg. They are a uniform brown in colour, with the coat taking on a reddish tinge during the summer months. Older stags are often quite grey in the face and with a smaller area suitable for them to inhabit, hunting is quite problematic. Hunting season is usually declared in April, however a limit of one stag and one hind per hunter, hunting activities are limited. Also worth noting is each deer that is taken must be done so by a licensed hunter and each one must be tagged.

Hog deer generally congregate in smaller groups and feed both early in the morning as well as late in the evening. If they feel threatened they can switch to being nocturnal, and generally sleep near their feeding area. Hog deer are easily alerted to nearby hunters by other wildlife, so tree stands over water holes are a most effective means of hunting. You will require patience as these animals are both clever and skittish.

Hunting the Hog Deer in Australia

Even though hunting opportunities for the Hog deer are scarce, access is given each year to a good hunting habitat by the Blond Bay Hog Deer Advisory Group as well as guided hunts via management schemes on Sunday Island. The minimum calibre is a .243 Winchester for the hog deer.

We hope you have enjoyed reading our guide to wild deer in Australia and wish you happy hunting. Please contact us if you have any other questions.